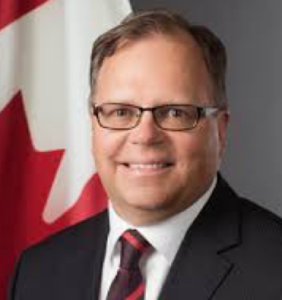 Stéphane Lessard joined Global Affairs Canada at the Consulate General of Canada in August 2016. As Canada’s Consul General in Denver, Stéphane oversees a team of 17 people who work within Colorado, Kansas, Montana, Utah and Wyoming to strengthen trade and economic ties; enhance political, academic and cultural links; and assist Canadians visiting or living in the five-state U.S. Mountain West region.

Stéphane began his career practicing commercial law in Montréal before joining the Canadian Federal Government in 1993, where he has held numerous senior and executive positions. Prior to arriving in Denver, Stéphane spent the last ten years with Health Canada (2006 to 2016), where he served in different executive positions across the Offices of the Chief Scientist, the Strategic Policy Branch, the Healthy Environments and Consumer Safety Branch, and the Pest Management Regulatory Agency. He has also worked with the Canadian Space Agency (1993 to 2004), where, as the Head of International Affairs, he oversaw relationships with foreign national and multinational space agencies; and with Global Affairs Canada’s Global Partnership Program (2004 to 2006), where he focused on preventing the spread of weapons of mass destruction.

A native of Montréal, Canada, Stéphane and his wife, Raji Bansal, have three children: Jasmine, Lana and Benjamin.