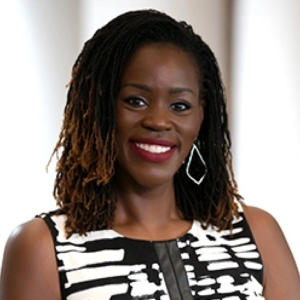 Tanesha L. Ford, a native of Kansas City, is the executive director of Kauffman Scholars, Inc. (KSI) and is responsible for oversight and management of the program. During her tenure, Kauffman Scholars has invested over 140 Million dollars to support 2500 plus students from sixth grade through degree attainment and is nearing the conclusion of its twenty year grant cycle in 2023. Tanesha provides leadership to a team of eleven staff members, who together are responsible for supporting students and alumni through postsecondary completion and transition to the workforce.

Prior to joining Kauffman Scholars in 2008, Ford gained knowledge and experience in student affairs, student support services, and residence life at both Muskingum University and Lehigh University.

Ford was elected to serve on the Kansas City Public Schools Board of Education in 2021. She has served as a board member for several nonprofits in Kansas City, is an alumna of the Centurions Leadership Program and President-Elect of the Centurions Alumni Association of the Greater Kansas City Chamber of Commerce. She is a proud member of Zeta Phi Beta Sorority, Incorporated, the Jackson County (Missouri) Chapter of The Links, Inc., and was named in Ingram’s 40 Under Forty feature in 2018.

Ford earned a master’s degree in college student personnel administration and a bachelor’s degree in therapeutic recreation from the University of Central Missouri.