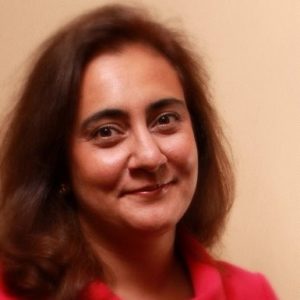 Ms. Bahar comes to ARS from NIH, where she served as the Chief of the Cancer Branch at the Office of Technology Transfer. There she led a team responsible for marketing, patenting and licensing NIH and FDA inventions in the areas of cancer, gene therapy, and biological response modifiers. Prior to that, Ms. Bahar was an Examiner with the United States Patent and Trademark Office (USPTO). During her tenure at the NIH, she first served as the Regional Coordinator for the Mid-Atlantic Region of the Federal Laboratory Consortium for Technology Transfer (FLC) from 2008 to 2011 and then as the National Chair from 2011 to 2013.

Ms. Bahar has spoken nationally and internationally on a wide spectrum of topics ranging from restriction practice, double patenting, and claim drafting to technology transfer and commercialization, business development, and licensing. She is the recipient of an NIH Director’s Award, a Mentorship Award, seven Merit Awards, an FLC S.T.E.M Award, three Excellence in Technology Transfer Awards, a State and Local economic Development Award and a FAES NIH Team Teaching Award. She was the 2014 recipient of Volunteer of the Year Award by Maryland Economic Development Association. In 2015, she was named one of Top 100 Women in Maryland by The Daily Record; received an Abraham Lincoln Honor Award and a Presidential Volunteer Service Award. In 2018, she received the Harold Metcalf Award for her sustained service to the FLC.

A patent attorney registered to practice before the USPTO, the State of Maryland, the United States District Court for the District of Maryland, and the United States Court of Appeals for Federal Circuit, Ms. Bahar is also a Certified Licensing Professional (CLP). She is a graduate of the University Of Maryland School of Law. She also received a Master of Arts degree from New York University and a Bachelor of Science degree with Honors in Chemistry and French from Dickinson College.