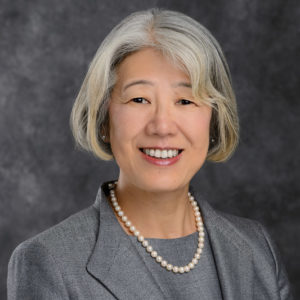 Consul General Takeuchi joined the Ministry of Foreign Affairs of Japan in 1982. Her overseas posts since then include the Embassy of Japan in Singapore, the Consulate General of Japan in New York, and the Consulate General of Japan in Detroit. Prior to her assignment to Denver, she served as Senior Director of Operations in the Ministry’s Foreign Service Training Institute, and as Director of the International Affairs Division at the Board of Audit in Japan. Her wide-ranging experience within the head offices of the Ministry of Foreign Affairs in Tokyo covers US politics and foreign policy, international organizations, APEC (Asia-Pacific Economic Cooperation) Forum, Asia-Europe Cooperation, international energy and trade policy, and domestic public relations.

As of April 2019, Consul General Takeuchi is one of 39 women serving in 631 managerial posts above director-level within the Ministry of Foreign Affairs, and one of just 13 female heads of mission among 246 foreign diplomatic offices representing the Japanese government around the world. In this respect, she has played an active role as a mentor for junior officers within the Ministry, delivering an important message toward achieving a “society where anyone can shine” regardless of gender or social status. Further, she has recently shared her professional experiences as a role model for other government officials through official training programs provided by the National Personnel Authority.

Throughout her career, she has visited 27 countries, including China, South Korea, Thailand, Indonesia, Malaysia, Myanmar, and the UAE, among others, and attended G7 summit meetings in London and Munich as well as G20 summit meetings in Washington D.C. and London. She is married with two sons, one born in Singapore and the other in New York.