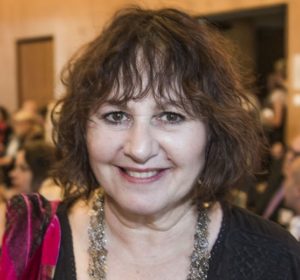 Leslee was voted by the NY Times the No 2 Most Impactful Woman of 2015 (second to Hillary Clinton), and has been awarded the prestigious Swedish Anna Lindh Human Rights Prize (previously won by Madeleine Albright). She has also been named Safe’s Global Hero of 2015, Global Thinker by Foreign Policy, and has won the Best Producer Award (Women in Film & Television) for her ground-breaking documentary “India’s Daughter”, which has won 28 international awards including the Peabody Award and the Amnesty International Media Award for Best Documentary 2016.

A filmmaker (producer and director) and Human Rights Campaigner, Leslee is no stranger to successful campaigning films. Her productions include the drama “Who Bombed Birmingham?” (starring John Hurt) for HBO and Granada TV, which directly led to the release of the ‘Birmingham Six’ after 17 years of wrongful imprisonment. The day after the broadcast, British PM, Margaret Thatcher, proclaimed in the House of Commons: “We will not have trial by Television int his country”; nonetheless, the film led to a reopening of the trial and the innocent men were freed and Britain’s most infamous miscarriage of justice was reversed.

Leslee’s feature films for her production company Assassin Films include “East is East” (awarded upward of 35 other prestigious awards worldwide, including a BAFTA [British Oscar] for Best Film, and the London Critics’ Circle Producer of the Year Award for Leslee). East is East did much to promote tolerance and the celebration of diversity as between the Asian and British communities and has become a classic film which is taught in schools across Europe.

“India’s Daughter”, has been critically acclaimed around the globe, provoked a global discussion about gender equality and violation of the rights of women and girls, and sparked a global movement to end violence against women and girls.

The perspective and insights yielded by the 2½ journey whilst making “India’s Daughter”, have led Leslee to be founder and CEO of an NGO (UK and US based) – “Think Equal”..