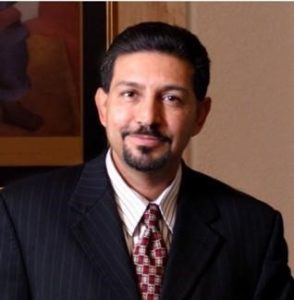 Dr. Lawrence Hernandez grew up in a Mexican American family of eight children in a Pueblo, Colorado east-side barrio. He has drawn national attention for his impassioned approach to educational reform and his provocative efforts to challenge racial and structural inequality. Dr. Hernandez has overcome relentless attacks from powerful entities over several decades and has remained steadfast in his commitment to social justice.

As a first-generation student, despite being in the top of his graduating class, he had no college assistance. On his graduation day, he told his father that he was “Outstanding student of the year” among his class of 400 but received no scholarship money. That afternoon, they drove to the local college where his father demanded to meet with the president. After barging into the office and showing the president his son’s report card, Dr. Hernandez was given $500.00 by the university and enrolled himself in college and took out a loan for the remainder of his first semester. Once he learned more about scholarships, he became obsessed with ways to pay for college. He subsequently received thousands of dollars of scholarships and he never had to take out another student loan. He became responsible for teaching dozens of peers how to write scholarship letters, obtain government financial aid and build relationships with influential people who could help them with their careers. He was near completion of a pre-med Biology degree, but after being directed by his father to do something practical, he enrolled in an RN program and obtained a nursing degree while also pursuing another degree in his passion for child psychology. After flipping through a textbook and finding a picture of world-renowned Professor Phillip Zambardo standing in front of the Stanford University campus, he set on a path to gain admission. He also pursued and gained entry to all the top five universities in the United States. In all, Dr. Hernandez has six college degrees and numerous certifications.

He later served on the Stanford Admissions committee and then was recruited to Harvard University, where he worked as professor,  graduate admissions leader and conducted research at Boston Children’s Hospital and the Harvard Family Research Project.

He designed the Heave-HO tutoring method, Going Slow to Go Fast, Healthy Intrusiveness, the One Minute Interaction and created the first Early College High School, all of which have impacted the achievement of thousands of students and accelerated the educational opportunities of many disadvantaged families. Dr. Hernandez has worked as a college professor, school principal, healthcare executive and professional speaker for the past 30 years. He founded Admissions Geek to help level the playing field for first generation and underrepresented students.

He is a former Spencer Fellow, author, three-time winner of the National Trio Award and assists hundreds of young students of color each year, gain admission to top colleges, graduate and law schools around the country.

His greatest joy in life comes from his wife Annette and his four children, Amanda, Roman, Lauren and Nina.