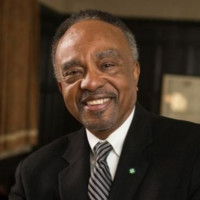 The United States Supreme Court was not the picture Taulbert would see each morning while
growing up on the Mississippi Delta. He saw the cotton fields—a world he thought would never
change. Taulbert’s world changed! As a special guest of former Supreme Court Justice Sandra
Day O’Connor, Taulbert took to the podium at the Library of Congress and addressed members
of the Supreme Court and their invited guests.

Taulbert’s lessons from the Delta continues to impact his life. Time Magazine’s recognition of
Taulbert as one of America’s top emerging entrepreneurs gives credit to his Delta uncle, Cleve,
who introduced him to the power of “gumption” now known as an entrepreneurial mindset. His
Uncle’s story has been captured in the international best seller…Who Owns the Ice House. This
mindset propelled Taulbert into the world of “Fitness” as the entrepreneur who assisted in
bringing Stairmaster Exercise System to the world. Taulbert, not one to rest on past success, is
now in his 6th year as the President and CEO of ROOTS JAVA COFFEE, the only African American
owned national coffee supply company.

Taulbert, the writer is recognized and embraced around the world from South Africa to Australia.
His first book, Once Upon A Time When We Were Colored, became an international best seller
and a requested gift for Nelson Mandela upon his release from prison.

His most recent book, The Invitation was chosen by the Architect of the United States Capitol as
part of the 50th year celebration of the signing of 1964 Civil Rights Legislation. Taulbert has
written fourteen books, produced a major motion picture and served as a consultant on several
documentaries: Jews in the Delta and the Emmy winning-BOOMTOWN, The Birth of Tulsa,
Oklahoma.

Though recognized as an entrepreneur, writer and lecturer, Taulbert background includes
banking, as an employee and as part of a banking team that started a de novo bank in Tulsa,
Oklahoma which later sold. Today Taulbert, a graduate of the Southwest Graduate School of
Banking at Southern Methodist University serves as a director of Central Bank of Oklahoma.
Taulbert’s reputation as a human capital development consultant (The Freemount Corporation)
has been tapped by the University of Utah to open their 2018 Fulbright Scholars Innovation
Conference. These one hundred and twenty scholars will be coming to Salt Lake City from around
the world. Taulbert’s address, The Revival of the Inquisitive Mind will open the conference.
Taulbert a member of Phi Beta Kappa was educated through high school in the Delta (graduating
valedictorian of his class) and now serves as a Trustee for the University of Tulsa and on the Board
of Reference of Oral Roberts University. Taulbert has been inducted in the Enlisted Airman Hall
of Fame. He is also a recipient of the 27th NAACP Image Award for Literature. He is a Trustee for
the Tulsa Library Trust, the Oklahoma Foundation for Academic Excellence, the Tulsa Historical
Society, and serves on the Eudora Welty Advisory Board, the Anne Kathryn Sickle Cell Fund and
the Indian Nation Council of Boy Scouts.